I went to two Packer games this season, on December 22 vs. Pittsburgh and the January 4 playoff game vs. San Francisco. Few other events get as many people outside for as long in the cold as Packer games do. So I wanted to reflect a little on how Packer fans have a good time in the cold weather: how do Wisconsin residents adapt to the ‘frozen tundra’ experience? Are Packer fans crazy? Why do we take pride in sitting (and drinking) in the cold? 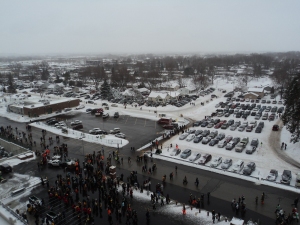 Before the 49er game, there was a lot of media attention given to the potential for extreme cold, the possibility that it might be the coldest NFL game ever. (It ended up around 20 degrees away from being the coldest. A huge difference.) Some writers still found the single-digit temperatures intimidating: Will Leitch said of Lambeau attendees “I can guarantee you an extreme few of them had a good time.” But for those who, unlike Leitch, actually attended the game… well, from what I saw, the weather actually didn’t seem to affect people that much. Sure, people were somber after the Packers lost. But did they have fun before and during the game? Yes, it looked like they had plenty.

At the first game, I talked some about the weather with my neighbors in the stands, but that likely had a lot to do with the fact that I sat with several family members. At the second game, I heard few comments from fans about the weather. Hard to imagine, perhaps, with all the coverage the media gave this oncoming polar vortex, but it wasn’t a big topic for the fans. I spent well over an hour riding a bus back and forth to the second game, and little of the discussion there had to do with the cold, either. People did discuss the cold when it was time to head on out from the bus, but they sounded fairly practical: not complaining, just discussing what they would be wearing, and preparing to head on out. (With a little touch of ‘whoa, this is pretty cold,’ to be sure.) 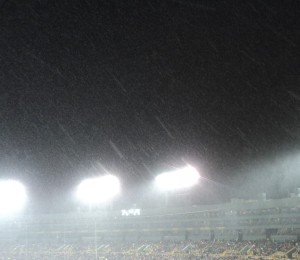 Was I cold at the games? Well, during the first game, my seat was high up, and my face got chilly at times, but the rest of my body was ok (and I underdressed a little). For the second game, I ended up being fine: my feet got cold at points, but the free hand-warmers eventually warmed those up.

So how did the fans handle this? Well, we live in Wisconsin. We’re used to being in cold weather, to going out into it. (Perhaps sportswriters like Leitch, a native of central Illinois, are not so used to this?) So yea, you’ve got to put a lot of clothes on. Yea, it takes some time to work through those layers when you’re in the restrooms. But people already acquire warm clothes for outdoor winter activities: we like our hunting, snowmobiling, skiing, and more. (Is Leitch familiar with ice-fishing?) So, you can take those clothes and wear them to the Packer game! (Setting this game apart, to be fair, was the fact that a notable portion of the fans sat under blankets.) And that sets the ‘style’ people are looking to achieve 😉 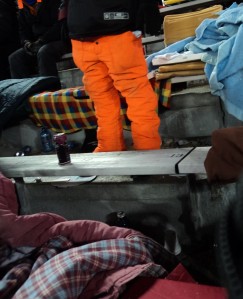 Some of those activities I mentioned involve sitting for long stretches, so people get practice at that outside of Packer games, too. That said, a nice thing about the playoff game was that the intensity level was high enough that I got to stand for much of the game; that allows one to move around more, and I find that movement makes a big difference in providing warmth when one is out in cold weather.

As for me – most of the Packer games I go to are in December and January. So I’m kind of used to feeling a chilly wind on my face as the music kicks in, as the crowd gets up to roar… and it seems a little odd to me when I got a game and I *don’t* feel that cold 😉

So people like me head on out – and yea, we’ll talk a little about how ‘whoa, this is cold’ and ‘yea, we’re kinda weird for doin this’… but mostly, it’s a game, and we’re goin! Indeed, I think one could say that that Packer fans look at the cold as somewhat of a point of pride. The fact that our team plays on a ‘frozen tundra’ on occasion (the Ice Bowl providing the epic extreme) – and that fans sit around them as they do so – becomes something that shapes a Packer fan identity as ‘people who can deal with the weather / the cold.’

And an identity as people who are dedicated, who will go out, support what they are loyal to, hang out with their friends, tailgate, enjoy themselves – even when the temperatures are around zero. This is part of the identity fans and media coverage alike promote in relation to Lambeau. Why not adopt it as a general perspective on our state throughout winter? Instead of thinking of cold and snow as things that might get in our way – we can be proud of the ways we adapt to the weather. We are loyal, we enjoy ourselves, in all kinds of weather. Winter just provides us with some distinctive means of doing so. Let us keep that spirit alive, at Lambeau and elsewhere as well! 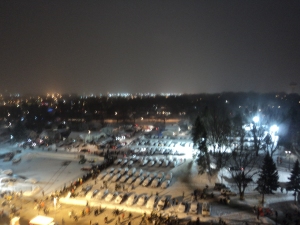 5 Responses to Culture of Cold at Packer games: Lambeau fans and Cold Weather